Algae consumption in France and Europe keeps increasing. The consequence of this trend is a progressive increase in the number of species commercialized as food and food supplements. 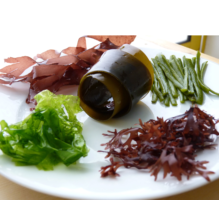 There is no specific regulation for edible seaweed/algae in Europe. The suitability of an algae for human food consumption is governed by the so-called “Novel Food” Regulation, which applies to food and ingredients which were not consumed consumption to a significant degree in Europe before May 15th 1997.
Nevertheless, France took a similar approach from the early 80s, leading to the constitution of a list of edible algae.
This list kept extending, through evaluations in France and in Europe. The European Novel Food catalogue also includes a list of additional species which can be consumed.
In parallel, the number of species commercialized as food supplements is also increasing. In France, close to 30 species of seaweed and microalgae are listed in the 2014 « Arrêté Plantes ». And French DGGCRF recently published a list of species traditionally consumed, or authorized on the basis of the mutual recognition principle.
Lastly, a growing number of microalgae and seaweed extracts are being placed on the market, as ingredients or food supplements.

We updated our algae regulatory review to take into account these evolutions. This review aims at compiling all those elements in a single document available to all stakeholders.