Green tides : Description of the phenomenon and different types of events 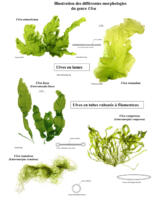 Seaweed (or macroalgae) are widely present on rocky shores off the Atlantic coast and English Channel. They naturally dominate, by their mass, the biocenosis of coastal substrates by which they also control local biodiversity. Due to their position on the nearshore, seaweed biomass is at the forefront of terrestrial pollution running off continental grounds. Recognized as particularly sensitive to changes in the quality of coastal waters, certain species can respond by reducing the size of their colonies (belts of large brown algae such as Fucales, or Laminariales), or by proliferating excessively (algal blooms or tides).

Among these seaweed blooms, green algae tides are the most characteristic, and more particularly those consisting of species from the genus Ulva. Depending on the species, this genus has two typical morphologies: a blade shape and a tubular shape more or less branched, flattened or filamentous. Commonly, the term “Ulva” is used to designate the Ulvae in blades and the term “Enteromorpha” for the filamentous type Ulva. 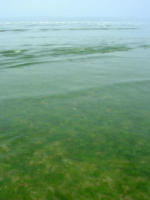 Green tides are particularly well known in Brittany, whose coasts have been affected for several decades. These events involve the proliferation of green seaweed under the morphological blade-type Ulva, (rarely enteromorphic type), directly related to the eutrophication of coastal waters. These blooms are called “green tides” since their first appearance on the north coast, in the late 60s-early 70s probably in the same time span of Torrey Canon oil spill in 1967 which occurred in this same area. The main specie involved in the green tides are Ulva armoricana and secondarily Ulva rotundata.

Ulva-based green tides grow on soft substrates in spring and summer and by vegetative propagation of drifting algae. The produced seaweed biomass can stay still on the seabed, maintained by tidal currents and shallow water swells in near shore. In sandy bays with gentle slopes, where a large amount of biomass can build up, a floating curtain located at the bottom of the beach can form at any time of the tide.

Initially, Ulva grow and live attached to solid substrates (from the rocky ledges to small pebbles immobilized in soft substrates). Before the appearance of green tides, Ulva seaweed were always occasionally found stranded in sandy bays, in a mixture with kelp seaweed beach-cast, notably after storm events which tend to strip off the seaweed from their substrate. Due to their particular buoyancy, Ulva could also remain a certain time in the surf zone of the sandy bays before disappearing. Indeed, the lack of nutrients in those areas prevented, until then, the growth and proliferation we now experience. Today, in these same locations and with this same free living and drifting form of Ulva, excessive multiplication is now reported and thus under the impulse of abnormal high levels of nutrients. Moreover, biomass production levels have reached such an extent that the green tides are now able to repeat themselves through the years, nourished solely with residual winter stocks and hence without the need for new supplies from fixed populations.

In these coastal systems, Ulvae can be locally or temporarily replaced by species of the same biological type in terms of nutritional opportunism (ability to quickly utilize available nutrients) and of behavior towards hydrodynamic conditions (ability to maintain adrift in the foreshore zones – shallow waters). These are other green algae exposing blade structures (genus Ulvaria,) or filamentous (genus Ulva, but of enteromorphous morphology, genus Cladophora), or other filamentous algae belonging to brown algae (Pylaiella littoralis) and even red (Falkenbergia rufalonosa).

Green tide events involving Ulva lead to extensive local strandings, covering the foreshore at low tide, or can also be definitively and massively rejected at the top of the beach where their decomposition in heaps will present visual and olfactory pollution, in addition to low or high health risks depending on the size and the state of decomposition of the strandings.

Also depending on the affected site, more or less significant amounts of algal biomass can be maintained permanently in more deeper waters, with the possibility to sporadically and massively colonize tidal flats in summer.

Green tides with Ulva are normally recycled from one year to the next with residual winter stocks, which are composed of small size algae, and which are also found drifting, preserved in shallow waters and only seldomly appear on the foreshore (because of the very small size of the algae that is not adapted for strandings). However, on some sites, it might be possible to observe a temporary contribution of Ulva populations detached from naturally colonized substrates, in the vicinity of the site, to these local winter stocks.

Therefore, green tides with drifting Ulva are characterized by the fact that they: 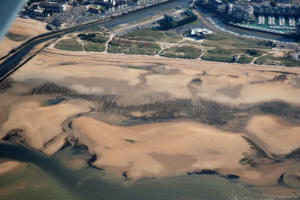 Other types of green tides :

Today, however, two other major types of green tides seem to be distinguished from the traditional green tides of drifting Ulva observed in Brittany, and thus by a difference in their biological functioning:

These green algae are reported as Ulva when found at the lower fringe of the foreshore, as well as in water reservoirs and foreshore channels, whilst enteromorphs are rather observed in the middle and upper fringes of the foreshore. Once the fixed algae have reached a certain size, the biomass can be torn off from the bottom, and depending on hydrodynamic conditions, can be stranded on the beach and mix with more or less significant quantities of beach casted seaweed.

The proportion of Ulvae in the strandings seem to be increased by a (selective) transport phase of the drifting biomass, and / or in some cases, by a regain of growth in the water column before stranding, with more or less long production phase of additional biomass.

The green tides following detachment events, seem at present predominant on the Normandy and South Loire coasts. Just as Ulvae green tides, they would not occur without favorable eutrophic conditions able to increase the production of fixed populations. However, it is considered that other control factors are involved such as complex competing interactions between plant and animal organisms for substrate colonization. Other types of pollution, physical disruption of substrates or climate associated factors can favor pioneer – or opportunistic – species of Ulva and Enteromorpha, and hamper the colonization or progression of existing seaweed belts. 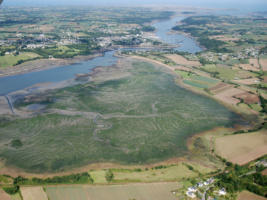 The green algae tides which occur in mudflats constitutes deposits that are not mobile and more or less thick leading to long-term sediment clogging. Such populations are probably recycled from year to year by persistent fixed / silted winter forms. In addition to the blade typey Ulva, many filamentous green algae (enteromorphe-type Ulva, Cladophora spp., Chaetomorpha sp.) can contribute to the seasonal bloom.